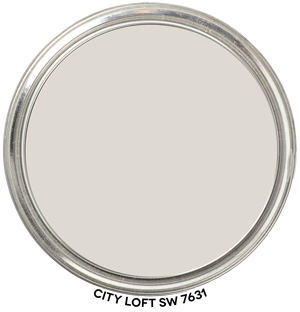 Here’s City Loft SW 7631 by Sherwin-Williams in context of its Hue Family neighborhood, 1 Y, on The Color Strategist Color Wheel. The pink arrows point to where City Loft SW 7631 fits in among the other colors according to its Value of 8.55 rounded to 8.50 and Chroma of 0.67 rounded to 0.75.

City Loft SW 7631 by Sherwin-Williams belongs to the Yellow Hue Family. If you look where it plots out on The Color Strategist Color Wheel above, you can see that its hue family is 1.29 Y – that’s really close to the end of the Yellow-Red hue family.

What this means is in a balanced quality of light (meaning there’s a nice mix of all the wavelengths in the visible spectrum) City Loft’s appearance could be described as pretty neutral – many might describe it as “greige”.  However, under a different light source, you could see peachy overtones,

It could also shift and look purple. Low chroma (not very colorful colors) like City Loft that belong to this hue family neighborhood are notorious for shifting and looking violet, lavender, purple. Some even describe it as plum brown.

That doesn’t mean that City Loft has “purple undertones”. It has nothing to do with undertones.

Rather, it’s susceptible to shifting because it’s low in Chroma which is why City Loft meets the criteria of “greige” for many people. Low Chroma colors like this are called near neutrals. Because they *live* so close to a true neutral gray in color space. If you look at the Atlas, the graphic with all the little squares, you’ll see what I mean about it being close to true neutral gray.

In summary, what all this means for you is City Loft is susceptible to shifting in context of stronger colors and under different light sources. 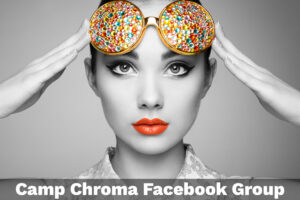