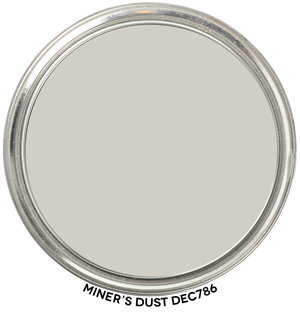 Finally… Learn to Decode Color to Get the Design Results You Want With The Four Pillars of Color from Camp Chroma
Go To Online Color Training
START NOW!

Here’s Miner’s Dust DEC786 by Dunn-Edwards in context of its Hue Family neighborhood, 2 Y, on The Color Strategist Color Wheel. The pink arrows point to where Miner’s Dust DEC786 fits in among the other colors according to its Value 7.88 and Chroma of 0.57 rounded to 0.50.

Don’t confuse hue family with the theory that it’s possible to see “undertones” in paint colors and finishes.

Hue family is derived from the color’s DNA – it is objective and repeatable.

Undertones (as most people use the term incorrectly) are subjective. They’re just someone’s opinion of a color; it’s how they’re choosing to describe how they think they see a color in whatever context and lighting is at hand. This theory and application of “undertones” is sketchy and random to say the least. Has nothing to do with actual, factual color attributes.

Miner’s Dust is also a low-chroma color which means it’s a near neutral. Specifically, when ordered in to the Munsell color space – and in comparison to all the other colors in that color space – it is closer to a true neutral gray than anything else.

It has a Value of 8 which means it has some body, some heft to stand up to inherent light sources. An LRV of 58% backs that up.

When you look at the color attributes for Miner’s Dust, it’s easy to see why it renders as “just a warm gray” with no discernible hue in many different contexts.