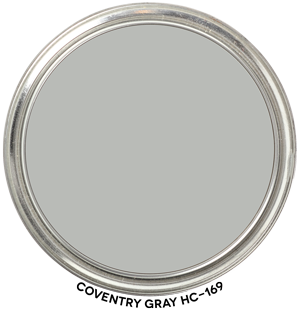 As far as colorfulness, it’s not.

In other words, it’s very close to a true neutral gray and it has a tiny amount of chroma or colorfulness.

As a result, Coventry Gray is classified as near neutral.

In a balanced quality of light, they are most often perceived as “just gray”, no discernible hue whatsoever.

But since they are so low in chroma, they are very susceptible to shifting in appearance depending on the light source.

Near neutrals from his hue family neighborhood (Green-Yellow) are especially prone to shifting blue.

Which is why some people will insist that Coventry Gray is a “true neutral gray”.

While others claim it has a “blue undertone”.

It doesn’t have a “blue undertone”.

It is not inherently a “gray blue”.

If it does look blue – or even green – it’s because of the light.

Don’t discount it as an option because someone says it has a “blue undertone” or labels it a “blue-gray”.

Neither one of those classifications is accurate.

The light is boss and Coventry Gray is one of those chameleon colors.

Definitely need to sample in your space.